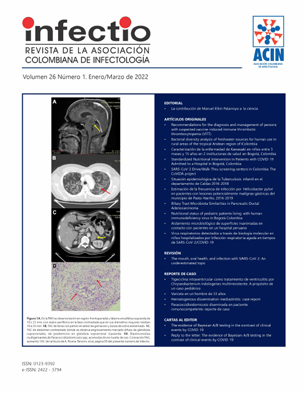 Background: Undernutrition is frequent among children living with HIV in developing countries. An interaction between malnutrition and HIV pediatric infection remains incompletely characterized in Colombia. Methodology: Retrospective longitudinal study, descriptive in nature, in 28 patients with a diagnosis of HIV infection, less than 18 years of age and receiving antiretroviral therapy. Variables were retrieved from clinical records at start of antiretroviral therapy and after 12 months. Statistical analysis was exploratory. Results: 4 out of 28 patients were stunted (14,3%; 95%CI: 1,3 – 27,2), 2 out of 7 patients were wasted (28,6%; 95%CI: 0 – 62), 5 out of 17 patients were underweight (27,8%; 95%CI: 7,1 – 48,5) and 4 out of 28 patients had thinness (29,6%; 95%CI: 12,4 – 46,8). No clinically relevant anthropometric change was detected during follow-up. Anemia prevalence was 52% and 82% of patients had some degree of dyslipidemia. Both viral load (p=0,001) and CD4 count (p=0,01), significantly increased and the proportion of patients with therapeutic failure remained invariable during follow-up. Conclusion: Malnutrition is frequent and its prevalence might have decreased. HIV program improved medical control of the disease, with stable therapeutic failure rates that were comparable with previous reports. Nonetheless, anemia and dyslipidemia remain to be a paramount therapeutic challenge.