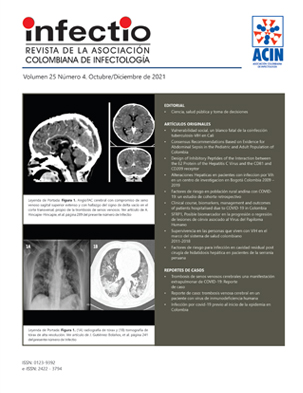 Infection through the Hepatitis C virus does not have a vaccine and treatment with pegylated interferon and ribavirin can fail; which is why it may cause chronic infection and, consequently, could develop liver failure or hepatocellular carcinoma. It has been described that virus-cell recognition occurs between the E2 viral envelope protein and diverse cell receptors, with this interaction being critical in viral infection. which is why the study sought to identify inhibitory peptides of the interaction between viral E2 protein and the CD81 and CD209 receptors. Methodology: Through the RCSB protein database, crystals from the CD81 and CD209 receptors were selected, CD81/E2-HCV, CD209/E2-HCV complexes were carried out by SWISS-MODEL to generate inhibitory peptides of protein interaction through the Rosetta web server, this interaction was validated through ClusPro and finally, determined the theoretical physicochemical and cytotoxic properties of these peptides. Results: two peptides were obtained, without predicted toxicity, with a theoretical capacity of blocking the protein interaction between the E2 protein of the virus and CD81 and CD209.