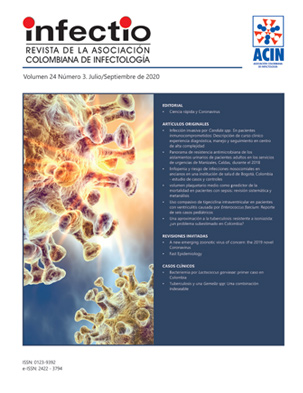 Objective: We aimed to describe the microbiological characteristics of infections in patients from an oncological center during 2.014-2.016. Methods: In this cross-sectional descriptive study, a total of 7.837 cultures corresponding to 1.216 patients were included. Microbiological and sociodemographic data were taken from cancer diagnosed patients admitted to Oncólogos de Occidente S.A. in Pereira, Armenia, Manizales and Cartago from January 2.014 to December 2.016. The bacterial resistance profiles were defined according to the CLSI guideline. Culture foci were blood, urine, tissue biopsies, skin and soft tissues, mucous membranes and feces. Results: The culture-positive rate was 27,94%. Amongst 2.190 isolates, Escherichia coli (22,42%) was the most frequent, followed by Klebsiella pneumonia (21,27%), Pseudomona aeruginosa (13,83%) and Staphylococcus aureus (5,11%). The most common mechanisms of antimicrobial resistance in Gram-negatives were Extended- Spectrum ?-Lactamase (45,45%) and AmpC-type ?-lactamases (37,71%). Discussion: Up to nearly one-third of our participants’ cultures were positive and a vast majority were gram-negatives, provided with ESBLs or AmpCs which in oncological patients it is a catastrophic outcome. We recommend to establish antibiotic dispensing policies thus achieving a microbiological risk control and improve the epidemiological surveillance. Empirical use of beta-lactams with extended spectrum or cephalosporins of 1 to 3 generation is not recommended due to the high resistance found.