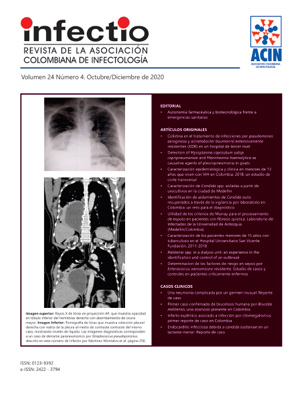 Objective: to describe an experience in identification and control of an outbreak of Ralstonia spp. in a renal unit. Material and Method: an epidemiological investigation of a hospital outbreak in 2 sites and extramural service of a renal unit. The investigation included patients who presented fever or chills, during or after dialysis, and who had positive blood culture for Ralstonia spp. Results: Of 769 hemodialysis patients, 124 were identified with bacteremia by Ralstonia spp.; of these, 98.4% had catheter access and 1.6% had fistula. The overall attack rate was 16.1% and the case fatality rate was 0.8%. Environmental cultures were taken and drugs and devices were tracked. Several cultures were taken of the prefilled heparin following the methods described in the International Pharmacopoeia. However, it was the technique of microbial isolation recommended by experts that enabled the isolation of the microorganism and confirmed the source. Conclusions: The outbreak described exceeded the number of patients affected documented in literature. It was caused by a contaminated batch of heparin. Evidence is provided of a recommended by expert technique used for the isolation of Ralstonia spp. in order to achieve control of outbreaks in a timely manner, minimizing clinical, economic, and social impact.