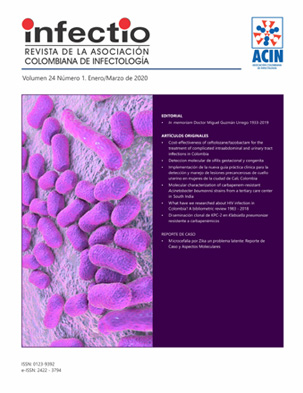 Objectives: Carbapenem resistantAcinetobacter baumannii is an important therapeutic and infection control challenge worldwide. In this study, we investigated the prevalence and distribution of molecular mechanisms of resistance among carbapenem resistant A. baumannii species at a tertiary care setting in South India.

Results: Eighty-seven of the isolates were found to carry the blaOXA-51 gene and 81 (91%) isolates were found to have blaOXA-51-like gene and blaOXA-23, gene. The blaOXA-24 like gene was detected in two isolates of which one also carried blaOXA-51 like and one isolate carried blaVIM coding gene. The prevalence of blaNDM, blaIMP, blaVIM genes was 12(13%),14 (16%) and 57(64%) respectively. Cluster analyses revealed a 90% similarity and were divided into 5 clusters. Most of the isolates containing carbapenemases coding genes grouped under cluster A, C and UC. Considerable heterogeneity was observed within UC cluster indicating circulation of multiple strains of A. baumannii within our institution.

Conclusions: Carbapenemase coding blaOXA-23, blaOXA-24 and blaOXA-51 -like were more common than blaVIM and blaNDM. The presence of blaNDM with other genes coding for carbapenemases indicate the ability of the strains to acquire novel genes despite having its share of the blaOXA like carbapenemase.