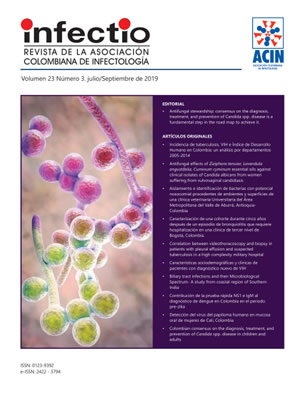 Objective: Biliary tract infections include cholangitis and cholecystitis. They are associated with high morbidity and mortality in elderly patients with co-morbid disease. The present study was undertaken to determine the microbial aetiology causing biliary tract infections and also to study their antimicrobial resistance profile.

Materials & methods: A retrospective study was conducted from January 2011 to December 2016 at the Enteric Diseases Division, Kasturba Medical College Hospital, Manipal. Patients with biliary tract infections admitted in tertiary referral health care hospital, Manipal were included for the study. Aerobic and anaerobic bacteriological and fungal aetiology of biliary tract infections were recorded along with their antimicrobial resistance profile.

Results: Out of 307 bile samples sent for aerobic culture and susceptibly testing 187 (60.91%) were positive for culture, of which Escherichia coli (44.4%) was the predominant aetiology followed by Klebsiella pneumoniae (27.3%). Among the 14 samples sent for anaerobic culture, 5 (35.75%) specimens showed growth, of which Bacteroides fragilis group was found to be the predominant anaerobe. Among the 201 bacterial pathogens tested for their antimicrobial susceptibility, 108 (53.73%) isolates were resistant, out of which 9 were PDR Enterobacteriaceae with 12 ESBL strains. All the Candida species were susceptible to fluconazole with the exception of C. glabrata and C. krusei. All the anaerobic isolates were found to be susceptible to Metronidazole.

Conclusions: The high rate of bacterial infection particularly gram-negative bacteria was recorded. It is necessary that antimicrobial therapy be initiated when culture or the clinical conditions reports caution. Routine aerobic and anaerobic culturing of bile samples with biliary tract infections are imperatively necessary. With the emergence of multidrug resistant pathogens and change in the microbiological spectrum of biliary tract infections, there is a need for the empirical antimicrobial therapy in every clinical setting.