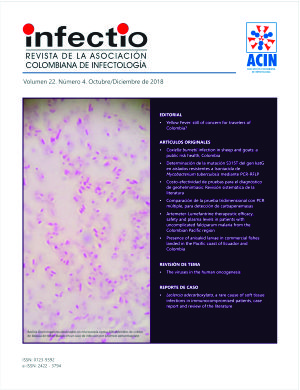 Based on epidemiological associations and experimentation, relationships between viruses and cancer have been established. For more than 14 million new cases of cancer per year, it is estimated that 15% are related to viral agents. Epithelial, hematolymphoid and mesenchymal malignancies related to different viruses have been document such as Epstein Barr, Kaposi’s sarcoma, hepatitis B and C, human lymphotropic type 1, Merkel’s carcinoma and human papilloma. New virus with oncogenic potential such as cytomegalovirus, JC polyoma virus and BK have been described. The interaction of the viruses with the host induces oncogene activation, inhibition of tumor suppressor genes and activation of miRNAs, as determining factors in the development of cancer. The pathology is initiated with the infection that induces the deregulation of cell signaling. The Epstein Barr virus is the oncogenic prototype, with 1% of the human cancers related to it.