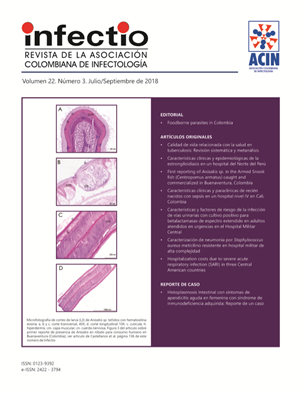 Objective: Nematodes of the Anisakidae family are parasites found in aquatic organisms. The lack of studies on anisakidosis and Anisakis in Colombia has meant this type of parasitosis is not widely known by health personnel and underreporting of the disease is highly likely. The objective of this study was to identify anisakid nematodes in the armed snook fish (Centropomus armatus) obtained by artisanal fishing and sold commercially in the coastal port city of Buenaventura.

Material and methods: Morphological identification of these worms was performed using taxonomic keys and supplemented with microscopic study using the histochemical Hematoxylin-Eosin technique.

Results: Nematodes of the genus Anisakis were found in 42% and the mean abundance was 2.8 in the C. armatus.

Conclusions: The findings confirm the presence of Anisakis sp. in fish for human consumption in Buenaventura, the main fishing port in the Colombian Pacific region. This finding in itself warrants further investigation into the possibility of an emerging disease in Colombia.