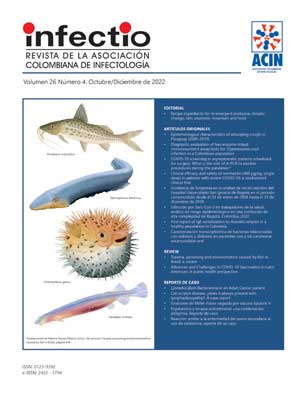 Objective: To evaluate the diagnostic accuracy of two enzyme-linked immunosorbent assay tests to determine Trypanosoma cruzi infection in a Colombian population. Material and methods: Analytical study with case-control design of a diagnostic evaluation. Sensitivity, specificity and diagnostic efficacy of total CHAGATEK ELISA and recombinant CHAGATEK ELISA were determined. Positive predictive value, negative predictive value, and positive and negative likelihood ratios were calculated. The kappa coefficient was found to estimate the concordance between the index and reference tests. The discriminatory capacity of the tests was expressed by the area under the ROC curve. Results: Of the 184 samples included in the study, 99 were negative for T. cruzi and 85 were positive according to the reference tests used. Sensitivity for total and recombinant ELISA was 97.6 % and 98.8 %, respectively; while specificity was 97.0% and 94.9%. The level of concordance of the total and recombinant ELISA was almost perfect and the discriminatory ability of the two tests were good. Conclusions: It was demonstrated that the two tests can confirm and exclude the diagnosis of Chagas disease and have a good diagnostic performance.